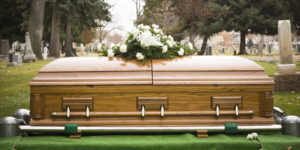 Thinking Outside the Box…

By Laurie A. Guzda

We’ve become quite familiar with the words: recycle, hybrid, compost, carbon footprint and conservation. It would be hard not to notice the significant increase of awareness for “Going Green.” Global warming may in fact be due to an increase in population and the pollution we create. It may well be the normal progression of nature. Only two things are certain – taxes and death.

Since we are not discussing taxes, let us proceed to the later. Have you made plans for your final resting place? Conventional burials typically involve toxic embalming fluids, which can leak into the ground water and water supply.  Even cremation can use up to six gallons of fluid oil, over a pound of activated carbon and add to mercury emissions. Caskets are usually made from hardwoods, steel, copper and bronze. Some cost effective models use plastic to resemble wood. Vaults use steel and reinforced concrete. There is no official number of annual deaths in the US but if you add the leading causes together the number is somewhere between two and 3 million – that adds up to a staggering number of coffins, urns and formaldehyde.

But rest easy; there are a number of “Go Green” options available. An Eco-Cemetery, also known as natural or green burial grounds, is a cemetery where the body is returned to the earth to decompose and recycle naturally. The body is prepared without chemical preservatives and is buried in a biodegradable casket or a shroud of organic material. You won’t find vaults or headstones but rather markers of native trees, flowers, shrubs or flat indigenous stones which do not intrude on the landscape. Eco-cemeteries are protected in perpetuity from future development through a conservation easement. 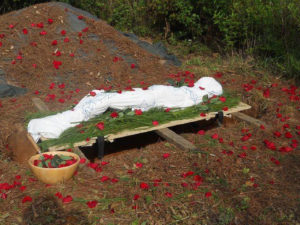 Since 2005, the Green Burial Council has been working to make burial sustainable for the planet, meaningful for the families, and economically viable for the provider. And in that short period of time, they’ve emerged as the “gold standard” among consumers, land trusts, park service agencies as well as the cemetery/funeral profession.

The Green Burial Council is developing a certification program that is bringing about a new ethic in death care rooted in transparency, accountability and ecological responsibility. Creating an international network of “approved providers” who are committed to reducing toxins, waste, and carbon emissions that have been associated with conventional end-of-life rituals. They bring conservation organizations together with cemetery operators, funeral establishments, and cremation companies to create burial programs that facilitate the restoration, acquisition and stewardship of natural areas.

Joe Sehee is the founder/executive director of the Green Burial Council.  He has worked in the green burial field since 2002 and the death care industry since 1999.  A senior fellow with the Environmental Leadership Program, “enviropreneur,” Joe also consults land trusts, park service agencies, and private landowners interested in developing burial grounds as a strategy for protecting natural areas.

Ramsey Creek Reserve in Westminster, South Carolina serves as the paradigm for Green Burials. They manage the 32-acre preserve as a native ecosystem complete with flowing streams, wildflowers and mature forests. William “Billy” Campbell, MD is the founder of Ramsey Creek; the first exclusively green cemetery in the United States. Widely regarded as the leading authority on burial and ecological restoration, Campbell is president of Memorial Ecosystems, Inc., a for-profit firm that develops and operates green burial grounds. He also serves in an advisory position for the Green Burial Council.

Currently there are but a few Green Cemeteries throughout the States. But the number continues to grow. A standard burial can cost anywhere from $6,000 – $15,000. A Ramsey Creek burial costs approximately $2,300. 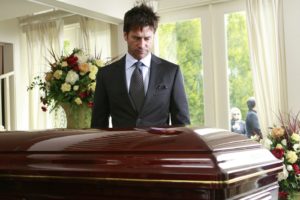 Current funeral standards began in the 1940’s. Prior, the deceased would be laid out in the family home. Partly to receive guests and mourn but mostly to ensure the deceased was in fact, dead. In days past, many individuals were in a coma and not technically dead. The “Wake” was put into practice to give a loved one a chance to “Wake Up” before internment.  Post WWII, as the economy flourished and the middle class boomed, purchasing expensive and ornate caskets became a thriving new market. In order to delay burial and allow for an open-casket presentation, use of formaldehyde was introduced.

Each year, 22,500 cemeteries across the United States bury approximately: 30 million board feet of hardwoods (caskets) 90,272 tons of steel (caskets) 14,000 tons of steel (vaults) 2,700 tons of copper and bronze (caskets) 1,636,000 tons of reinforced concrete (vaults) 827,060 US gallons of embalming fluid , which most commonly includes formaldehyde. (Compiled from statistics by Casket and Funeral Association of America, Cremation Association of North America, Doric Inc., The Rainforest Action Network, and Mary Woodsen, Pre-Posthumous Society – Mary Woodsen is a trustee and officer (president) of Greensprings Natural Cemetery Preserve in Newfield, NY.)

In light of green awareness we are learning that a traditional burial is not favorable to the environment nor is it cost effective. Perhaps, this is the time to literally start thinking “Outside of the box.” 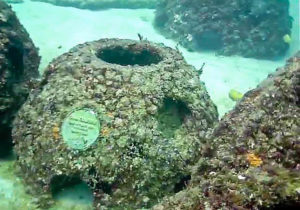 Eternal Reefs, home-based in Decatur, Georgia, can take your ashes and mix them with a special concrete formula to mould ‘reef balls’. These reef balls are placed to provide a marine habitat that is a nurturing biosystem for fish and other forms of sea life that are critical to the environment. Loved ones can do the mixing, if so desired, and be present for the release of the reef balls. Families and friends are given a GPS reference, with the longitude and latitude of the living marine memorial.

Eternal Reefs has reef sites from Ocean City, NJ, just south of Atlantic City, to South Padre Island in Texas, with their first placement in the upper Chesapeake Bay, fall of 2008. They provide between ten and fourteen placements per year and will expand that number as demand increases.

One of the advantages of cremation is that it allows families time to deal with the loss without having to get into a race against time to get the family together for a memorial service. Families can plan how, when and where they want to hold the memorial. Many families have held onto the remains for years before they either found Eternal Reefs, or were ready for closure from the loss. The actual time from the casting of the memorial reef to the final placement is generally four weeks.

Another unique alternative is LifeGem®, a certified, high-quality diamond created from the carbon of the deceased as a memorial to their life.

Located in Elk Grove Village, IL, LifeGem® diamonds are creating by subjecting carbon, the primary element of all diamonds, to conditions that recreate the forces of nature. Remains are placed in a specially designed one-time use crucible. These cylinders must withstand temperatures up to 3,000 degrees centigrade and pressure up to 1,000,000psi. The longer the growth chamber is exposed to heat and pressure, the larger the stone. General Electric first pioneered this technology in the mid 1950’s. The carbon is captured from any existing remains of any standard cremation or from a lock of hair.

All LifeGem® diamonds are individually inspected, graded and identified by a gemologist trained by the Gemological Institute of America (GIA).

As we all learn to take responsibility for our carbon footprint which includes using our buying power to influence suppliers to provide eco-friendly products, the ultimate recycling process will most likely be our last one.